The Daily Fix: Eyeing opportunity in the new week

Chris Weston
Head of Research
Share
Vacation and quality time away from markets can be your best friend in trading, and you simply can’t put a price on achieving a correct mindset and the energy needed to keep one’s sanity in the constant slog of interpreting news and the cause and effect.

That said, trying to pay limited attention to market moves over the past two weeks has been a tough slog, and while many have already had to navigate through the US-Iran tensions and the fairly rapid reversal in market sentiment, we now head full thrust into a big week for markets. Where the event risk is real, and whether you want to focus on corporate earnings (US Q4 earnings ramp up tomorrow with Citi and JPM hitting us with numbers), politics, economic data or central bank speakers, this week has it in spades.

As things stand we have a slightly negative lead-in for Asia from Friday's US trading session and judging by the muted FX open, we can assume S&P500, Aus SPI, gold and crude futures will follow suit with a calm open, reflecting the lack of any major news seen over the weekend. We still expect a weaker open for Asian equities, where our call for the ASX 200 sits at 6878, although it feels as though traders will use weakness as an opportunity to accumulate.

Moves in GBP made on the open

We are, however, seeing some life in GBP on the open, with sellers reacting to comments from BoE member Vlieghe, who has detailed that he sees the 30 January meeting as ‘live’, joining the ranks of Carney and Tenreyro who are advocating the potential need for stimulus. BoE member Michael Saunders speaks on Wednesday, just before the release of inflation data, and it will not surprise to hear he is advocating for policy stimulus given he has been a standout dove on the MPC.

As we can see from current rates pricing the market is still not on board with a near-term cut here, giving a cut a one-in-four chance, and that should keep the GBP from rallying to any degree. In fact, in the short-term, the higher probability is we see a test (in GBPUSD) of the 23 December pivot of 1.2905. I like EURGBP a tad higher this week, although the daily chart suggests the path higher is hardly convincing. 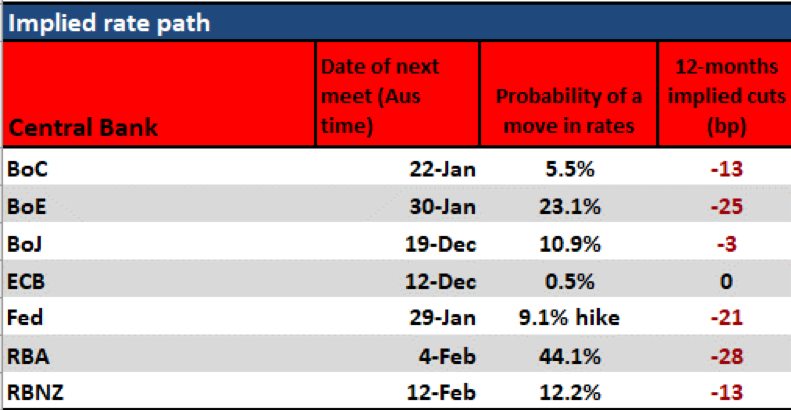 The debate on the USD will not go away

The debate on the prospects for the USD is as intense as ever, where Friday’s US payrolls won’t have done the greenbacks prospects any favours. Of note, average hourly wages fell back 3%, resulting in small buying in US Treasury’s across the curve, led by the long-end, with a 2.5bp flattening of the 2s v 10s Treasury. The impact in FX markets was muted, however, with the USD index closing down by a modest 0.1%, and showing once again that there is good support for the USD below the 96-handle (on USDX).

USDJPY was also largely unchanged on the session, and if we flip to the weekly chart, we see price printing an outside period and testing the 200-week MA and clear supply into 109.70.

This week we watch the signing on the US-China Phase One trade deal on Wednesday, and subsequently, we keep a beady eye on USDCNH, which looks like it could be headed for 6.8100-6.8000 in the near-term. We also focus on US CPI (consensus for core is 2.3%, headline 2.4% YoY) and retail sales (+0.3%) through this week, although, the talk from the Fed of late suggests we are going to need to see things really deteriorate if we are going to see a monetary policy response and we really need to be looking into 2H20, which is where markets are pricing a further cut from the Fed.

US Presidential elections are now on the radar

Interestingly, the focus on the US Presidential elections has undoubtedly ramped up, specifically, after Friday’s CNN/Des Moines poll which has reinforced Bernie Sanders as the front runner for in the Iowa Caucus, and just ahead of Elizabeth Warren. The Iowa Caucus (on 3 February) has become a potential vol event in my opinion, ahead of primary’s in New Hampshire, Nevada, South Carolina and Super Tuesday (3 March). Sanders is now the clear favourite to take out Iowa, as he is in the New Hampshire primary (11 February), with many focusing on the form Iowa has had in predicting the last four Democrat candidates.

Sanders has a genuine chance of leading the Democrat campaign against Trump on 3 November, where the bookies have him as an equal chance with Biden. A market that feels that Sanders has a material chance of taking the US Presidency is a market that will need to adjust and adjust with some vigour. The time for understanding the key dates and surrounding playbook on the election is now upon us.

RBA QE is a key trading thematic for 2020

Another fascinating thematic surrounds the prospect of QE later this year from the RBA. Friday’s Aussie retail sales were clearly strong, but the subsequent analysis has been that December’s retail numbers will be weak, as the 0.9% November print was front-loaded by the Black Friday sales.

Timing QE is obviously key here, as it is not impacting the AUD to any extent at this stage, and we will need to see the cash rate at 50bp before the QE debate really heats up and starts to be priced into Aussie assets. As we can see from the rates table above, that the February RBA meeting is live and could go either way, although, the domestic data flow this week is light and we watch for next week's December employment report to potentially increase the prospect of a cut.

I have no real conviction on trading the AUD this week, where semantics on global markets will dictate and we will be keeping an eye on China data flow, notably the credit data which has a strong read-through into the PMI data series. That said, the AUD is firmly on the radar as RBA QE is now one of the brewing overriding macro themes for traders in 2020.