Chart of the day: US tech stocks lead markets to make or break point

After the quickest fall into bear territory ever, US stocks have had a bullish run. The US Tech 100 Index (NAS100) has caught our eye as the tech sector leads markets to a make or break point. Is this all just bearish noise and a temporary relief rally, or is this about to be the shortest bear market in history?

We got some bullish signals from the NAS100 on yesterday’s daily candle as markets shrugged off the highest weekly jobless claims number in history. The tech index pushed to a lower low than the day prior before powering on to a new high. The index broke through the downtrend (red line) since 20 February and closed above 7815.00, the 38.2 Fib retracement of the Feb-March selloff. 95% of stocks on the index moved higher yesterday.

There’s no denying that the technicals are compelling, but is this really something we want to chase higher?

Volume traded through the NASDAQ yesterday was light, 15% below the 30-day average. This does raise concerns as one would expect to see volume higher in a normal rally. Illiquidity can lead to exaggerated market moves. Big intraday swings up and down are all part of a bear market as investors struggle to accurately put a price to anything. A telling sign that this is all bearish noise would be the NAS100 slipping and closing back below the downtrend.

The S&P 500 (US500) is a broader gage of US equities and yesterday posted its biggest three-day run since 1933. That said, the US500 has found resistance at 2641, its own 38.2 Fib retracement of the selloff, and has so far been unable to push higher. The after-hours market had a run at the level this morning but is cooling again in the early Asian session.

Running positions into the weekend in these markets is a tough move. Whether long or short, there’s considerable gapping risk while markets are closed for the weekend due to high volatility and newsflow that can change so quickly.

The USA is now the global virus epicentre with more cases than any other country. Markets have priced in a dire situation, but as cases ramp up in the world’s biggest economy, price action will correct lower if the outbreak becomes even worse than anticipated. We’re also likely to see more government and central bank announcements over the weekend, which can propel price action higher or lower on the Monday open.

Stock prices don’t represent the economy today, they represent the economy in the future. So we’re at a make or break point here: if the outbreak causes more havoc than markets have already accounted for and not just Q2 but Q3 also starts to look dire, price action will need to correct lower.

If you are holding positions into the weekend, do balance your risk and make sure position sizes are appropriate. All the best out there.

Chart of the day: US stock futures signal lower open after worst week since GFC

The S&P 500 (US500) index closed below December 2018 support on Friday and looks set to open lower as futures fall 5%, hitting limit down ahead of the New York session.

US stocks closed Friday almost 15% lower on the week, the worst week since the 2008 GFC. Since Friday’s close, more lockdowns have been announced across the world, including in Australia, Germany, and several US states.

Price action had respected December 2018 support at 2338.6 for most of last week until virus fears ramped up again Friday as New York state went into mandatory lockdown. The US500 closed 4.3% lower Friday at 2304.9.

The benchmark index is trading at levels not seen since 2017. There is little support until the 2000 handle, a key level that supported the index between 2014 and 2016. 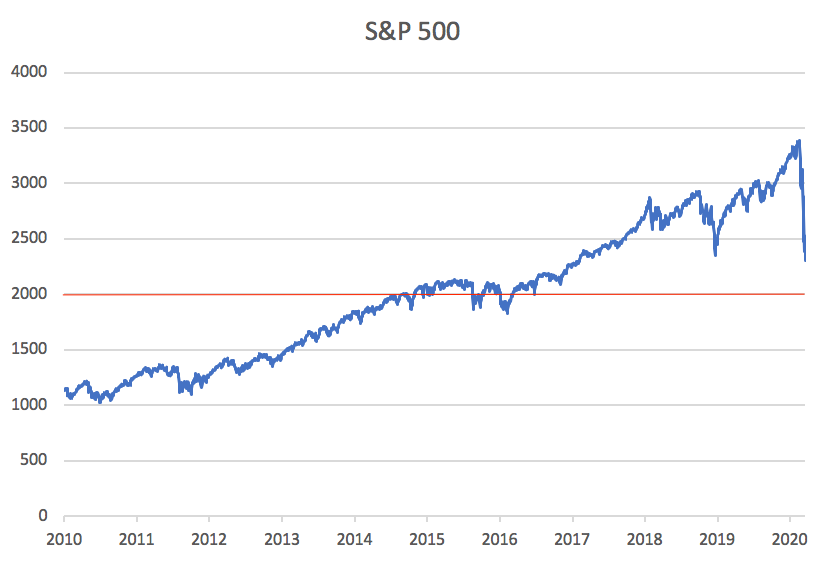 Markets have priced in a US and global recession as hopes for a V-shaped recovery fade and an L-shaped recovery looks more realistic. Stock markets will likely remain volatile until the virus is contained, and considering the effect hasn’t yet peaked, a sell-off towards the 2000 level isn’t unreasonable.

Chart of the day: A V-shaped recovery or bearish congestion?

US Stocks rallied yesterday when Joe Biden charged ahead in the Democratic nomination race, knocking democratic socialist Bernie Sanders’ odds of running against President Trump in November. We’re looking at the benchmark S&P 500 index (US500) this morning and asking: is this the bottom of a V-shaped recovery or is it all bearish congestion?

Investors were optimistic yesterday as they warmed to the idea of Biden’s presidential run while Congress announced an $8 billion package to combat the coronavirus outbreak.

But had markets really priced the risk of a far-left Sanders administration? Sure Sanders was ahead, but it’s unlikely the risk had been meaningfully priced in when it was way too early to call the race. Instead, it seems the boost to Biden’s campaign as moderate candidates rallied behind him - or ‘Joementum’ if you’d rather - was just an excuse for stocks to rally.

Health stocks in the benchmark index made the tidiest gains on the day, up almost 5%, as the prospect of a Sanders administration hurting the sector’s profitability felt less likely.

Bottom of the v-shaped recovery or bearish congestion?

The US500 is looking nice here: the index closed above its 200-day simple moving average (black line) and above the bullish trend line that runs from January 2018 (upper red). Add to that the earnings risk premium remains fairly cheap at this level and the bulls may have a case to take this market higher. Although a V-shaped recovery feels optimistic when daily virus cases outside of China continue to rise, this could be the formation of a slower L-shaped recovery.

On the other hand, this could all be bearish congestion. During times of crisis, the GFC included, volatility picks up and markets make considerable moves in either direction. On the left of the chart below, you’ll see considerable swings up and down as the GFC unfolded. If the virus newsflow takes a turn for the worse and price action successfully breaks below that solid support at 2855.00, we’ll be further from a recovery than it appears now. 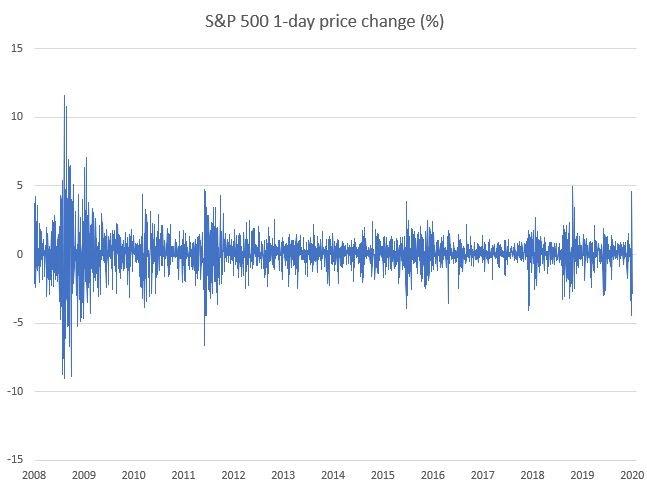