Homepage/Can the BoJ alter the one-way selling in the JPY?/
JPY

Can the BoJ alter the one-way selling in the JPY?

Chris Weston
Head of Research
Share
As most FX traders would attest to - the JPY has been taken to the woodshed, where the flow has been one way; it’s been brutal, but it’s been thoroughly deserved.

In a world where every G10 central bank is starting or strongly expected to hike rates, the markets are pricing a mere 18bp of hikes from the BoJ by the end-2023 – Many central banks are even looking at reducing their balance sheet. For now, the BoJ is still increasing theirs through unlimited buying of Japanese govt bonds to cap 10-year bond yields at 25bp – a process known as Yield Curve Control (YCC). 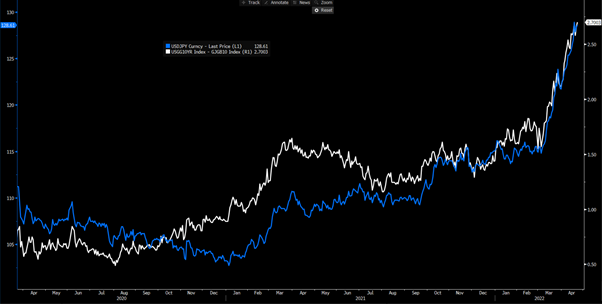 The consequence is that bond markets have been driving the FX show, and as the yield premium investors can achieve in the US (and other G10 FX nations) - both on a currency-hedged or unhedged basis - increases vs Japan, traders have been only too happy to short the JPY.

We can also see that relative inflation dynamics have been at the backbone here, with Japan seeing CPI (YoY) of 1.2% (the US is at 8.5%), while Japan’s 5-year forward inflation expectation sits at 80bp (vs 281bp for the US). Another major consideration is that Japan is a major commodity importer, so the dramatic rise in crude and other key imports has seen Japan’s terms of trade deteriorate sharply and the current account surplus – a cornerstone of JPY support over the years – is eroding rapidly.

Various BoJ officials and finance minister Suzuki have expressed concern on the currency and suggested the one-way moves in the JPY are now considered ‘bad depreciation’ – typically a trigger to justify some sort of policy action and the market is firmly on notice.

Is there even a need for the BoJ to act?

The first question I have fielded from clients is whether the BoJ should simply do nothing and allow the JPY selloff to continue – a weak JPY when inflation expectations while rising but are still low could be seen as a good thing.

I am sympathetic to this view, but given how the JPN225 has traded of late, it seems the market doesn’t see JPY weakness in the same beneficial light as it once did – a weaker JPY may tighten Japanese domestic financial conditions, not just through imported cost pressures but it incentivises capital out of Japan.

So, what can the various bodies do and how could the JPY react?

1. Talk up the prospect of FX intervention (jawboning) – this is the most likely near-term prospect for JPY support, and we should hear a clear change in tone if USDJPY trades through 130. In theory, the BoJ shouldn’t target levels, and it’s the rate of change is most important – either way, most feel a breach of 130 should see officials’ comment that ‘speculative activity will not be tolerated’ putting us on notice – volatility in the JPY should ramp up here.

Jawboning may cause rapid bouts of JPY appreciation, but traders will likely sell rallies and the moves will likely be short-lived.

2. Hike rates – a move away from negative interest rates (the BoJ current policy setting is -0.1%) could be one way to help stabilise the JPY. However, given the current market expectations, this seems unlikely in the market's eyes anytime soon. Recall many were saying the same thing about the ECB only a month ago and now they look set to hike in July.

3. Alter YCC – some have focused on a move away from YCC – this would need to be handled with real skill or it could cause Japanese bond yields to spike and the JPY to rally intensely. It is certainly unlikely they drop the program, at least initially – with a higher probability they move to target the 5yr government bond (from the 10yr) or they prepare the market that an end to YCC is coming.

Until such time that the BoJ move away from unlimited bond-buying to cap 10yr JGB yields then traders will be willing sellers of JPY – this action alone makes the BoJ by far the most dovish G10 central bank.

4. Intervening in the FX market by buying JPY – as discussed, the market will be on edge for this, especially if the tone from officials shifts up a gear, where the chances of this occurring increase with USDJPY above 130 and even more so through 135. In theory JPY buying through intervention should come shortly after the BoJ tweak monetary policy, as FX intervention is far more potent and lasting when monetary policy is tightening – so unless YCC is altered or the BoJ indicates rates are going higher, straight JPY intervention would see a rapid 200-300 pips rally off the bat – holding JPY shorts would be risky here (the actions are partly designed to impact JPY shorts) and intervention would unlikely be isolated.

Consider it's the Ministry of Finance (MoF) that would intervene in FX markets, not the BoJ, although the two bodies would work closely together. The last FX intervention from the MoF came in 2011 (with JPY selling) but buying JPY to support the currency is rare and the last time we saw this was in 1998.

Given the fundamentals justify the JPY weakness it feels that if the MoF did buy JPY then they risk huge international condemnation, especially given the public outrage at price pressures.

The JPY is cheap on any traditional valuation metric, leveraged hedge funds are holding a huge short JPY exposure and the technicals show grossly oversold conditions. I suspect it's for these reasons that clients hold a sizeable net long position in the JPY. However, the short-term set-up aside, until the BoJ alters its stance on YCC then there are few reasons to own the JPY other than scalps and day trades on positioning readjustment.

If the yield advantage in US Treasuries continues to widen vs Japanese bonds the USDJPY is only going one way and that makes the JPY arguably one of the most interesting currencies in G10 right now – what do the BoJ/MoF do from here? This is what’s being fiercely debated in the market, but for now, the Japan policy setting is so far removed from all other G10 central banks that the JPY weakness is entirely justified.