Luke Suddards
Research Strategist
Share
As we come to the end of another week in financial markets. Let's take a look at where we stand before that important US jobs number hits the wires.

The dollar has started May on a solid footing by reclaiming horizontal support and the uptrend line. From a seasonality perspective over the past 20 years the DXY index has gained 0.69% on average in May, so if this historical pattern repeats the dollar could be in for a strong month. On Tuesday, Janet Yellen the Treasury Secretary remarked that interest rates may need to be raised in order to combat overheating in the economy from all the stimulus. The market had a mini meltdown on her words and the dollar was bid as a result. Initial jobless claims data out yesterday printed below 500k for the first time since covid hit the US. As the 10-year nominal yield remains range bound and inflation breakevens continue to climb higher (highest since 2013), the result is a lower real yield. This takes away one of the dollar’s key bullish drivers. Short positioning was also increased in last week’s CFTC positioning data, this could cause some minor squeeze pressure if the dollar continues to push higher. Could a very strong Non-Farms Payroll number cause yields to flex their muscles and feed through into the dollar? 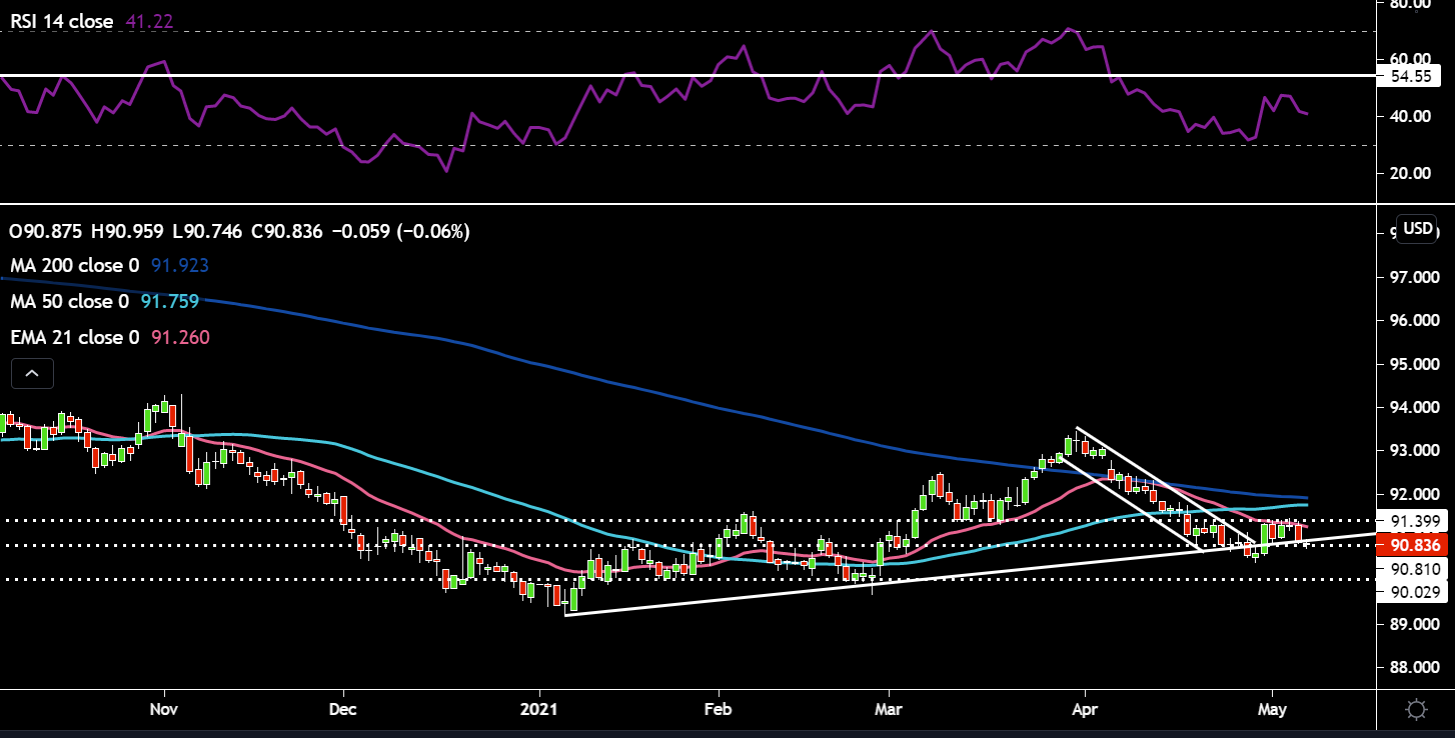 The technicals are mixed. Price is hovering right on 90.8 horizontal support and the uptrend line from early January. 21-day EMA is acting as dynamic resistance for the time being and capping gains. The RSI was marching higher, but now looks to be rolling over around the 40 level. Will be interesting to see if the DXY can close comfortably above the trend line and close to the 21-day EMA around 91-91.2.

Not much to write for the euro from a fundamental perspective. Although yesterday’s Eurozone’s retail sales figure was very strong both on a YoY and MoM basis, sending a positive signal as restrictions are gradually lifted. The European Summer Holiday season looks to be saved too. On the geopolitical front (more relevant for EURGBP), there was a flare up of tensions in Jersey with France threatening to cut off electricity to Jersey over a fishing row. Calmer heads look to have prevailed for the time being, but it shows how fishing like Northern Ireland remains a prickly issue between the EU and UK. We'll also hear from ECB President Lagarde today, although all eyes will be on the US jobs number. 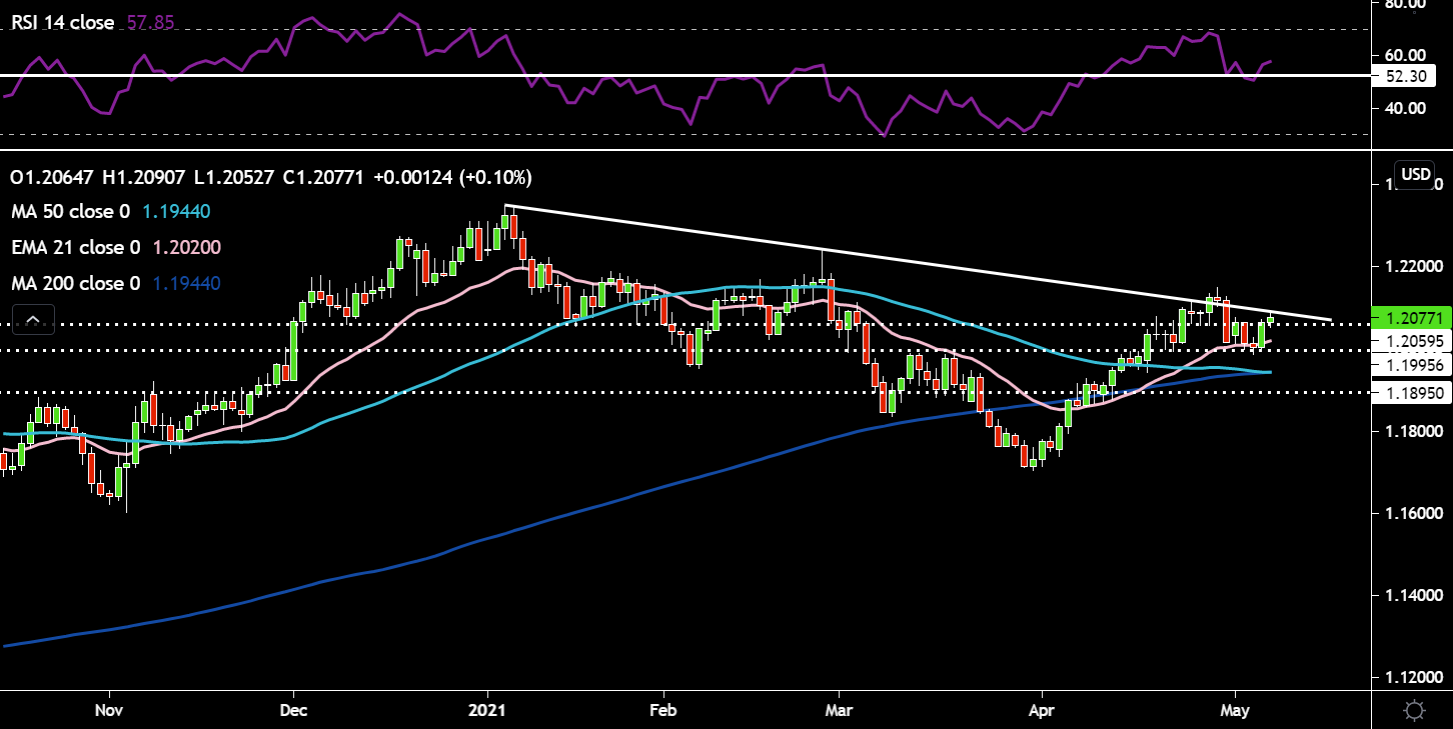 EURUSD peaked its head above the downtrend line around the 1.212 area. Price now finds itself right up against the same downtrend line and slightly above the 21-day EMA as well as the 1.205 horizontal support. Speaking of moving averages the 50-day SMA is very close to falling below the 200-day SMA, which would mean a death cross would occur (typically bearish). The RSI dipped below the 52 level and is now above it again – indicating the choppy up and down price action.  If the EURUSD rolls over and slices through the 1.20 support, then the next area which seems plausible would be the 50-day/200-day SMA around 1.194.

All week the pound had been waiting on bated breath for yesterday’s BoE meeting and some drip feed of Scottish Election news flow. The Old Lady of Threadneedle Street, decided to taper their asset purchase by £1 bln to £3.4 bln a week. This meeting also provided updated economic forecasts across GDP growth, unemployment and inflation. 2021 GDP was revised up to 7.25% from 5% previously. The BoE also expect UK GDP to recover pre-covid levels before the end of this year. Unemployment was revised down to 5.1% from 6.4% previously and inflation was forecast to be above the 2% target for this year, but then softer post that (transitory). At first it looked like the mild taper would work in Cable’s favour, but price. Markit services and composite PMI came in better than expected, solidifying the narrative of a strong Q2 for the UK economy. There could be some gap risk on Monday as the full Scottish Election results roll in from over the weekend. 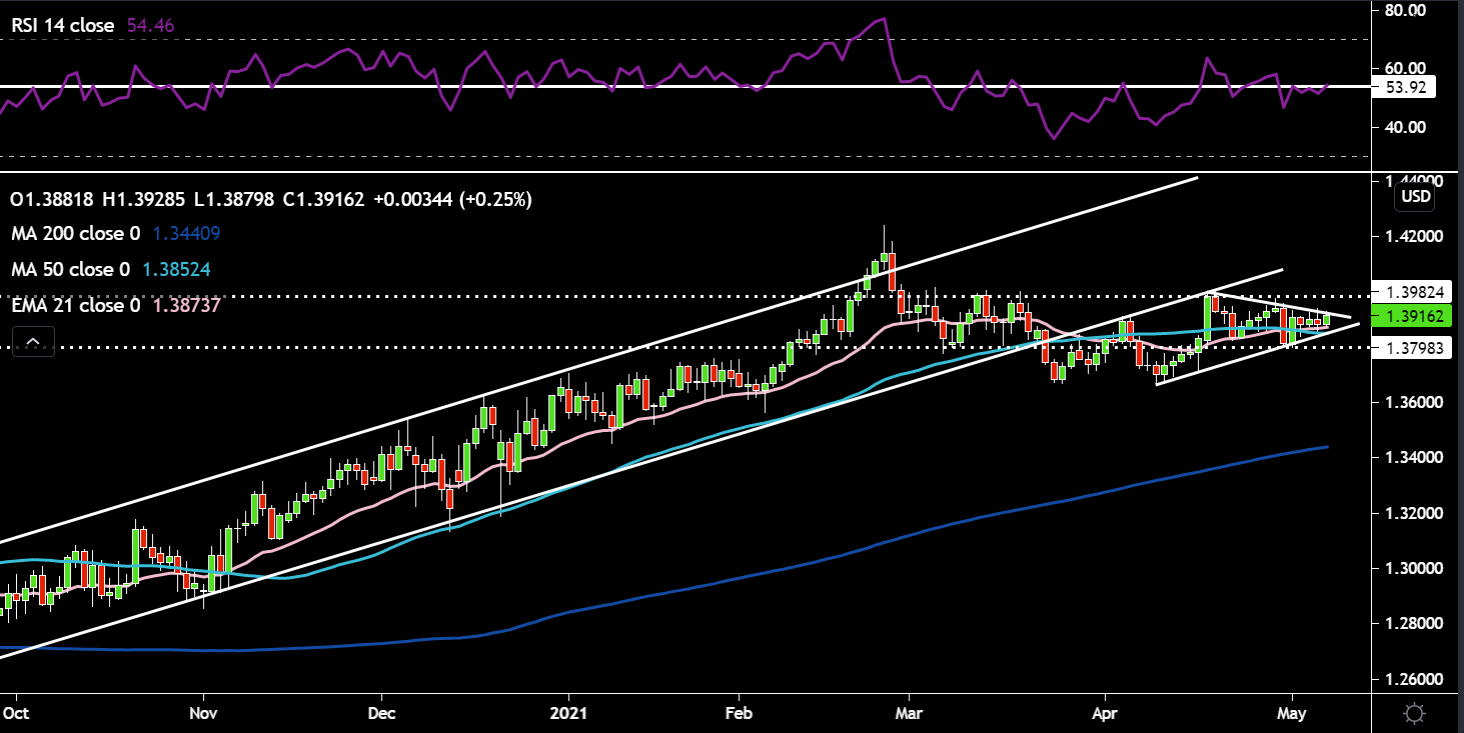 Price just can’t seem to overcome the 1.40 handle at the moment. The RSI recently had a go at piercing through the key 53 level, rolled over and is now having a 2nd go as of writing. Price is just above the 21-day EMA & 50-day SMA with the 50-day SMA just crossing below the 21-day EMA. In terms of chart patterns we have a small triangle pattern which has emerged, signifying a breakout in either direction is becoming increasingly likely. I’d like to see a move above the 1.40 level and back into the ascending channel to feel more confident on longs. From a seasonality perspective, the dollar is historically strong during the month of May, which could see Cable struggle to move higher throughout this month. Also, there is event risk as mentioned above as the Scottish Election results filter through. So be sharp out there.

The Aussie has had a lot on the go this week, kicking things off with a weaker than expected balance of trade number. The RBA meeting didn’t throw any curveballs at the market as they maintained their cash rate and 3-year yield target of 0.1%. In July, the RBA will make a decision as to whether they will shift their yield curve control from the April 2024 maturity to the November 2024 maturity. Simultaneously, they will need to make a decision about their QE programme as their current AUD 100 bln envelope terminates at the end of September. GDP forecasts were revised higher to 4.75% as the Australian economy continues to recover. However, the soft inflation data will keep the RBA on a dovish setting with rate hikes not taking place until 2024 at the earliest. Inflation will need to sustainably be in the 2-3% target band. This will obviously be a bit of a drag on AUDUSD. Geopolitically, relations between China and Australia remain frosty to say the least, yesterday China decided to suspend Strategic Economic talks. We may start to see a risk premium getting priced into the Aussie dollar given the significant economic reliance on China. With the EV theme in full swing, Copper shows no signs of slowing down and with the large appetite for steel iron ore prices are hitting records. Both these commodities are important drivers for AUD. 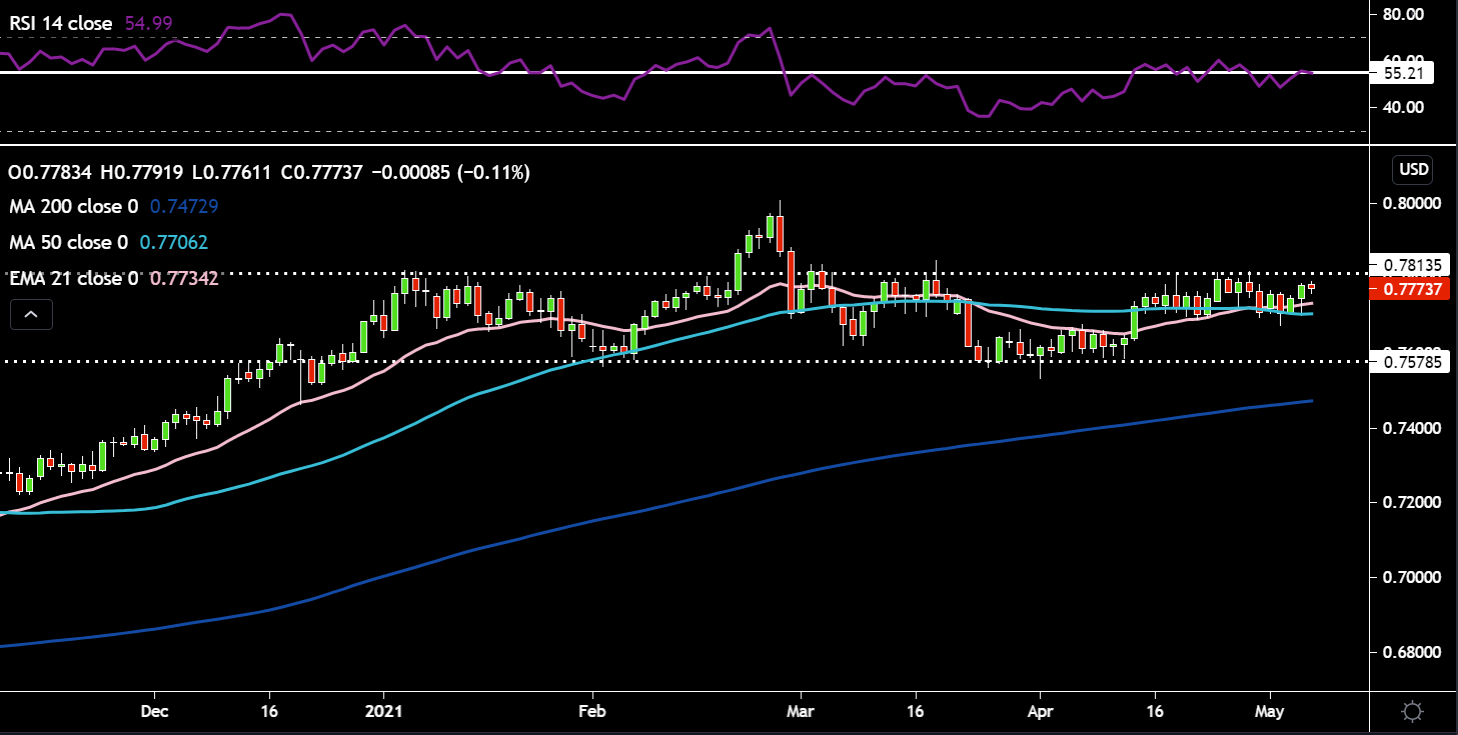 Price has been moving sideways in a wide range (0.75 – 0.78) from the beginning of this year. There was a brief overshoot of the 0.78 resistance to 0.8, but price faltered from there and is now back in the range. The 21-day EMA has crossed above the 50-day SMA, however, it’s very minor so we will have to see if this can push short term momentum higher. Both moving averages, particularly the 21-day EMA have been providing dynamic support to price of late. The RSI is just above the 55 level which marked previous price rallies close to the 0.78 resistance. With dollar strength in May, maybe it’s wise to play the range – looking to enter longs and shorts at range support (0.75) and resistance (0.78) respectively, instead of looking for big breakout moves.

Janet Yellen’s comments about raising interest rates would have left a sour taste in gold bull’s mouths. However, countering this, we’ve had inflation breakevens surging higher which has compressed real yields which is like rocket fuel for the yellow shiny metal. The dollar being rangebound has also removed a headwind for gold. Let’s see what that labour number out in a few hours does to yields and therefore gold’s price. 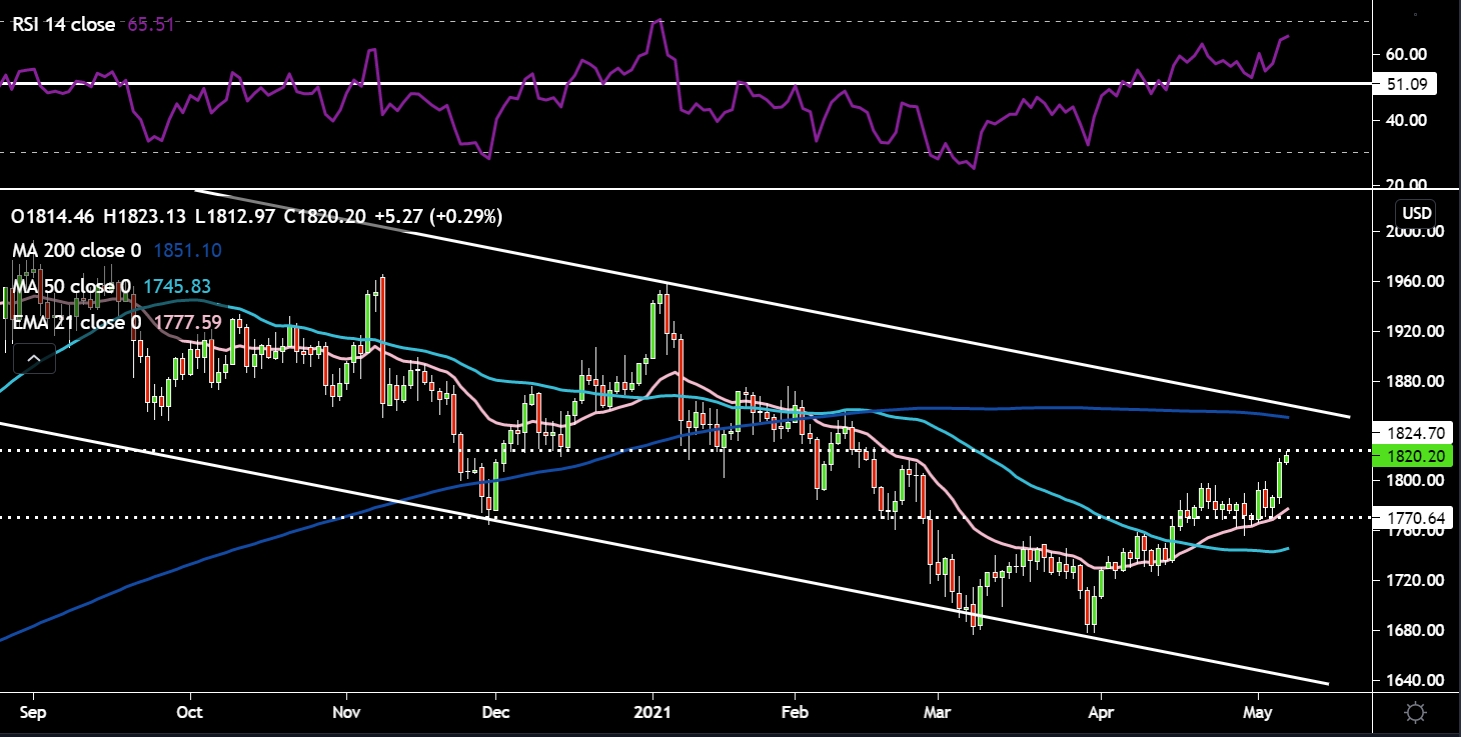 Gold is now well above the 21-day EMA and 50-day SMA. The RSI is charging higher towards overbought territory. $1800 was proving sticky last week, but was sliced through yesterday. Some stops were probably triggered and shorts covered. There is some topside resistance around the $1825 area. A push through here could bring the $1850 zone into play (200-day SMA). On a downside move, I'd look to $1800 and $1770 (horizontal support and 21-day EMA) as key support levels.

Official inventory data from the EIA confirmed API's big crude draw, comfortably beating expectations of a small draw. Oil bulls are looking through the virus problems in India and Japan towards a strong rebound of economic activity in the summer months of the US and Europe. The UK recently released a list of countries for travel which I expect to expand as we approach June. The British tourists will be lathering on the suncream and jetting off to sunny shores of Europe as a result. This should keep jet fuel demand firmer as we head into H2 of this year. There has been little news flow emanating from the important talks between the US and Iran, which will be an important event to keep an eye on for oil supply purposes.

Price has returned to the $67.5 level, after being above this level for the past few days. Both shorter-term moving averages – 21-day EMA and 50-day SMA are slightly tilted up. The 21-day EMA has crossed above the 50-day SMA. The RSI although above the key 53 level, has turned lower today. It will need to remain above this “line in the sand” to continue its ascent higher. We got all the way up to the key psychological level of $70. Price will need to take out this short term high to continue pushing northwards. From there the March 8 highs of $71.37 come back into play. To the downside I’d monitor the former resistance of $67.5 which could now act as support. Below that the $65 level would be key (50-day SMA). My only concern is if price rolls over again we could begin to see a rough double top beginning to form. The RSI certainly looks a bit double toppish.

The digital currency has been a tad range bound this week, kept in check by the 50-day SMA and the 21-day EMA. The $58k level is proving sticky as price looks for its next catalyst. Inflation breakevens moving higher will help Bitcoin remain bid as well as an indecisive dollar. General risk sentiment in equity markets have been solid enough to keep Bitcoin from rolling over. Traders got some jitters after the SEC Chairman, Gary Gensler while speaking to congress raised the notion that they should consider regulating crypto exchanges. In more positive news, another large financial services provider, Citi Group, are considering dipping their toes into the crypto pool as client interest surges. 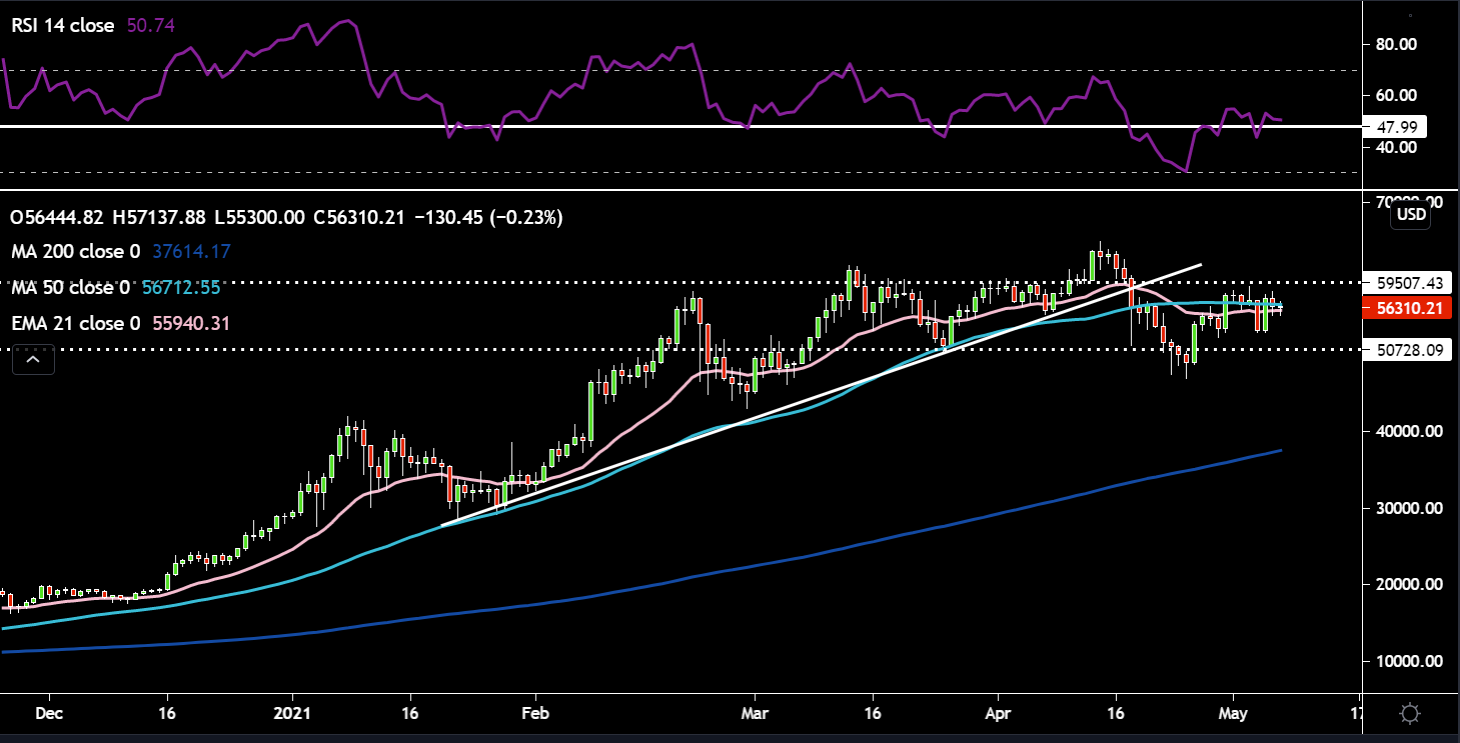 Price is struggling to overcome the $58k level as the shorter term moving averages contain higher prices. The RSI is hovering close to the key 48 level and needs to remain above this level if price is to have a go at the $59.5k resistance level. With May, historically being a bit weak for risk sentiment, Bitcoin could struggle. For any moves lower I’d keep an eye on the $53k level of support. 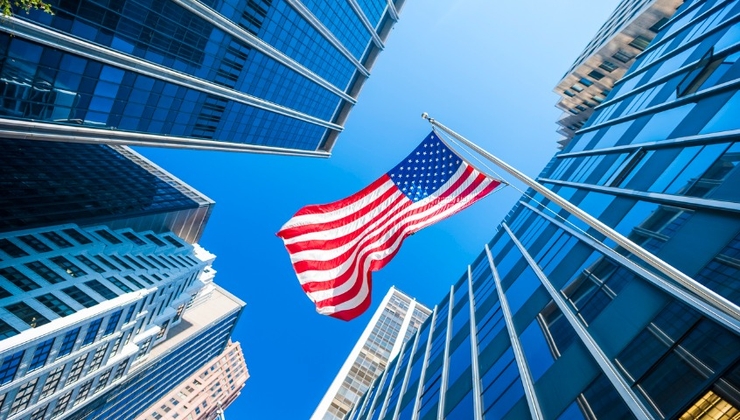 Get ready for payrolls - it could be big 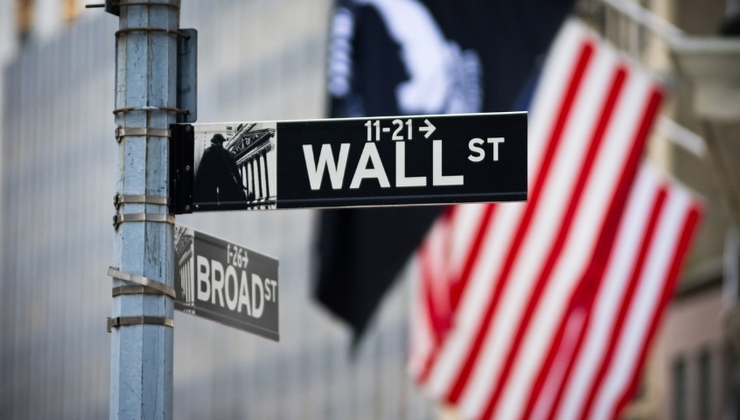