To an experienced trader, the level of volatility seen in cryptocurrencies could be advantageous. Harnessed correctly and with proper risk management, volatility and range expansion can be used very effectively in a trading strategy. Understanding the complexities of how cryptocurrencies work from a fundamental perspective is not easy. But that doesn’t mean there aren’t simple and effective trading strategies that can help you take advantage of the volatility in crypto. We explain how breakouts could be traded below.

2. Stick to your strategy.

3. Get your position sizing correct.

Applying each of these rules to a breakout strategy can be a great way to get involved in the crypto mania we’ve seen of late. Here’s how it could be implemented on our MT4 & MT5 platforms.

What is a breakout strategy?

A breakout occurs when the price of an instrument trades in a range and tests a resistance or support level multiple times. It then breaks through the resistance to the upside, or through the support to the downside, which starts a new trend.

You can set up a channel and profit targets using straight lines and trendlines, or the equidistant channel object on MT4 & MT5. Then, to add another layer of conviction to your strategy, add in an RSI indicator or Bollinger Bands to see if probabilities suggest a move past the support or resistance is on the cards.

While a breakout can work on various timeframes, the longer the better. Think 4 hour, daily and weekly. The risk-reward is likely to be higher, and the tests of support and resistance will have more weight behind them.

More about support and resistance below.

Mid-late January we had an ascending triangle forming. Ethereum was setting higher lows, and tested the 1420 upper level multiple times. A channel formed, and a breakout was seeming likely.

We can show this on the MT4/5 charts by using the horizontal line function (black) for resistance, and trendline (orange) for support. It’s important that you try to draw these closer to the close of the higher low candles than the wicks. 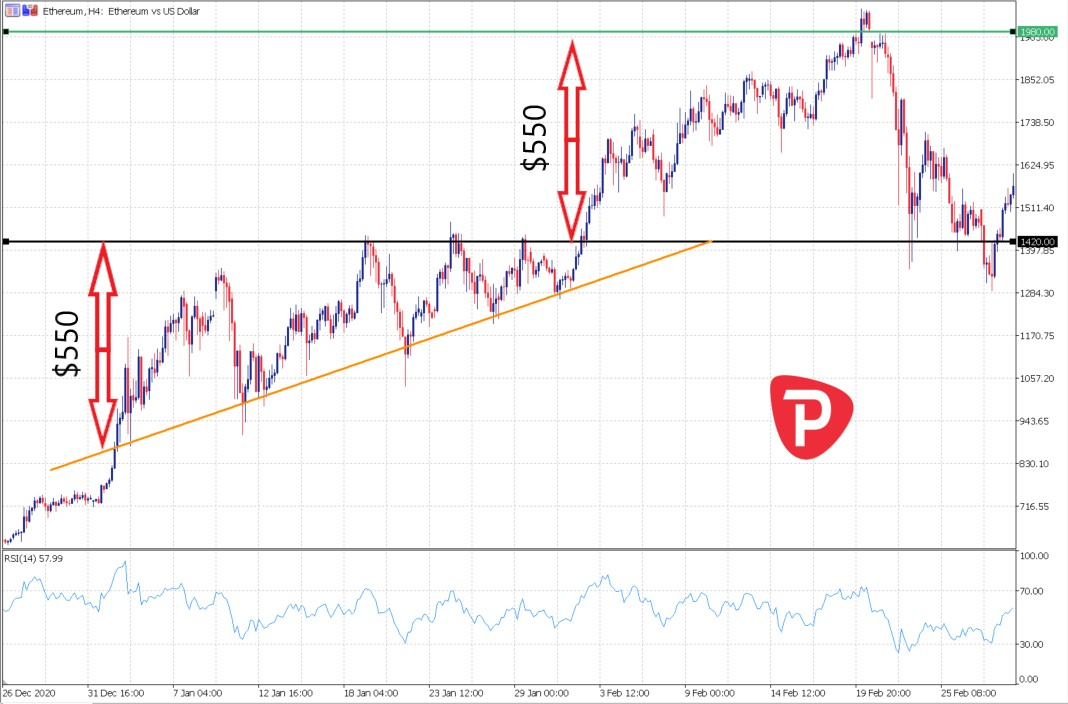 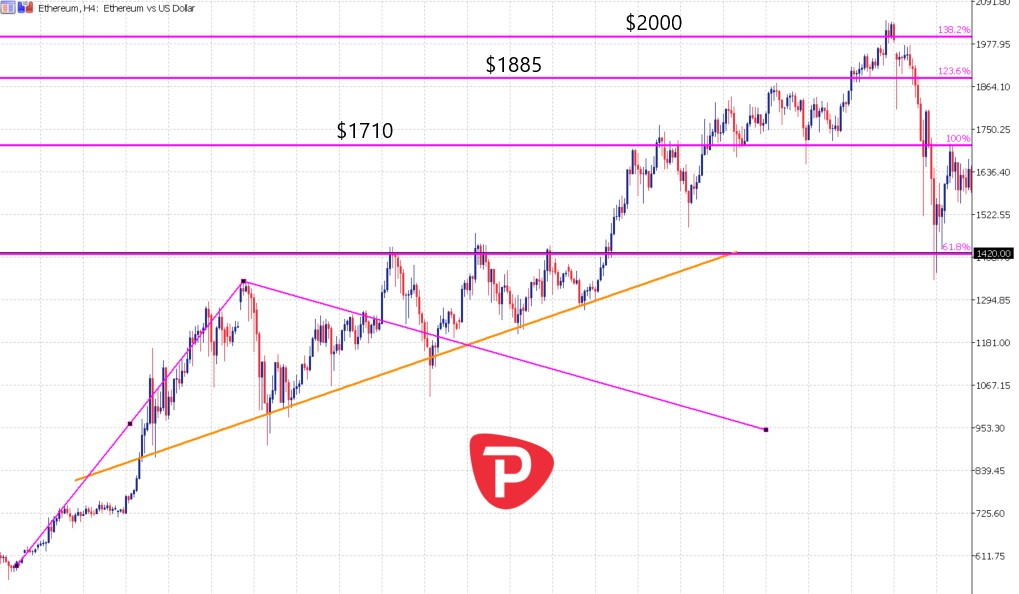 As mentioned above, fakeouts are one of the main risks of this strategy. Retests of support and resistance can prove fatal for an anticipated breakout. But is it all bad? Well, not always. In some cases, a fakeout can prove to be an even more powerful opportunity.

Take Bitcoin on the 1H chart below. 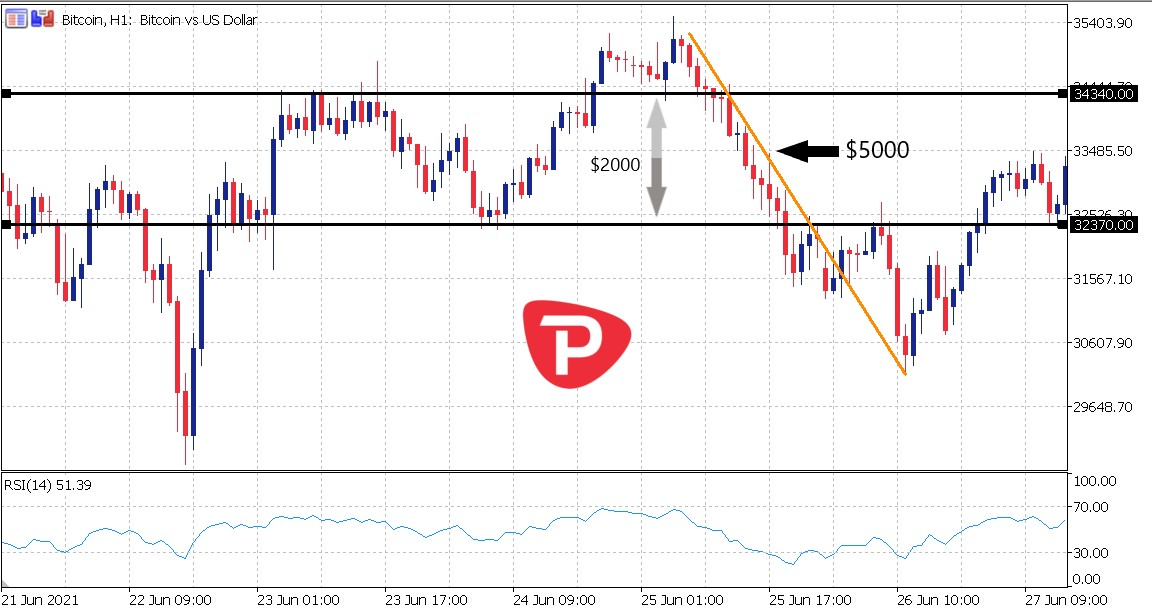 We can see resistance being tested several times around $34340 before falling to support at $32370. As price approached resistance again, we saw a first attempt to break through (red candle) which fell short, but a strong bullish next candle made it through to close above resistance. That was then followed by a further bullish candle which closed even higher, and so a breakout seemed like it was well and truly on.

Price action from this point retraced consistently, testing the new support (previously resistance) at $34340 with a brief attempt to push into higher highs. On the second retest, however, the breakout disintegrated. A very strong bearish move of almost $5000 eventuated from peak to trough.

This fakeout led to an even more prolonged trend reversal than any uptrend breakout one could have anticipated, being about 2x the size of the previous channel. If you were to pivot your strategy at this point, placing a sell stop just below support at $34340 and scaling into your position size with smaller orders, the opportunity to ride the short wave here would have provided a considerable profit over a short time period.

This is where it’s important to be mindful of retests of previous support or resistance lines and the trend reversals they may lead to.

MT4’s RSI indicator also provided some incentive to follow this move, with a downtrending reading around 50 at the time of the second retest, far from oversold conditions and indicating that there was plenty of juice in the tank for a move to the downside to play out.

Putting the strategy into action

If you’re new to crypto trading or trading in general, or you’re just looking for relatively simple strategy to take advantage of some potentially big moves in volatile markets, all of the tools you need are built into the MT4 & MT5 platforms. Simply open a demo account here and try out your strategies, and if you’re ready to put this strategy into action, you can sign up here.