The Daily Fix: The market looks nervous ahead of a massive US jobless claims

Another solid session in Europe but US trade has been less convincing for risk and I’d like to say the bulls have regained some share, but without flow data I’d argue a large degree of the move in risk is predominantly repositioning from shorts.

For those long, this is a trading rally and so many have reverted to the 2008 case study, where despite equity markets heading lower, we saw several 5%+ rallies before making a true low on 9 March 2009.

Participation in the S&P 500 wasn’t too bad, with 72% of stocks closing higher on reasonable turnover. I’m not overly enthused by the tape, as was the case in the NASDAQ 100, with solid selling activity kicking into the last 30 minutes on headlines that CA GOV: 1 MILLION IN STATE HAVE FILED JOBLESS CLAIMS THIS MONTH. It leads us to think tonight’s national number will be far worse than the 1.5m consensus call and it would not shock to see this north of 3m claimants. It makes today's Asia trade interesting and it would not shock to see traders sell into strength today in risk assets.

The daily of the S&P 500 shows clear indecision, but it did close above the 5-day EMA which has defined the sell-off since 21 February and that suggests a more neutral stance for now. Asia could lead, but if the index can squeeze into 2650 (38.2 fibo of the sell-off) and 2641 in S&P 500 futures, that would be my preferred zone for fading the move. 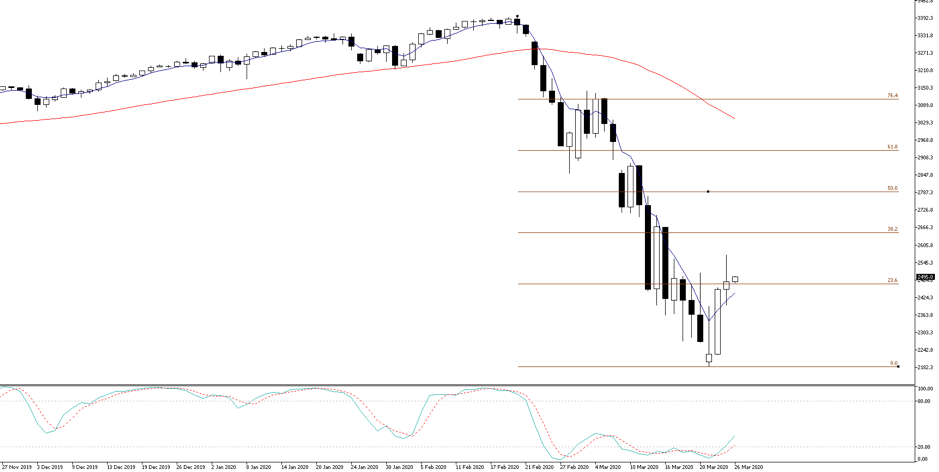 If I am looking at leads and how they flow through to Asia, we see:

So, the stage is set for Asia to open on a slightly positive note and that makes life very interesting and should tell us much about psychology. It’s a coin toss and looking at the backdrop there is something for the bulls and the bears, so let price push the trade today as it’s not immediately clear.