Chart of the Day: Interest rate expectations and implied cuts

Trade tensions have driven markets this year, spurring global uncertainty and elevated fears of a US recession. As economic data and global growth dwindled, the US Federal Reserve has lowered interest rates to spur investment. Several major central banks have followed suit, with market probabilities predicting most of the cuts along the way.

But the mood has changed recently. Economic indicators are looking up at the same time as phase one trade deal talks have buoyed confidence in markets. Below you’ll see rate cut probabilities for the next meetings, as well as the implied rate 12 months out. 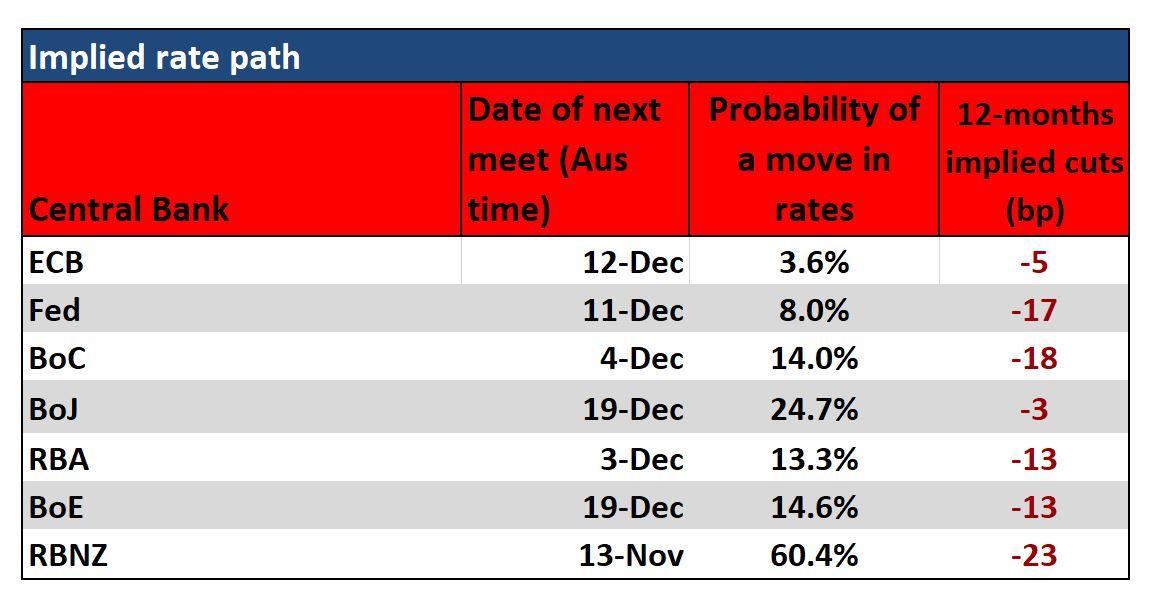 Probabilities of future cuts remain low across the board. The Fed has changed its stance from acting as appropriate to a data-dependent assessing of the appropriate path. RBA Governor Lowe has mentioned a ‘gentle turning point,’ citing a more upbeat outlook.

ECB rate expectations have been flat since the deposit rate facility was lowered 10bps in September. We have even seen small hike probabilities. And while the prospect of a hike is unlikely, it tells us that markets see eurozone monetary policy as exhausted.

Even the RBNZ, for which markets had priced a 13 November cut at 98% probability just two weeks ago, has pared back to 60%. NZ Q3 employment came in at 4.2% this week, rebounding just a touch higher than expected from 3.9% in Q2. The RBNZ has pencilled in 4.3% unemployment for 2020, so this doesn’t drastically move the needle.

But it looks like the RBNZ will make a small cut next week before joining the major central banks and holding rates for a while. It’s a live event, with NZD implied volatility the highest for G10 currencies next week, although only a small 8.4%.

Remember the current risk-on mood is mostly trade-driven. This week USDJPY dipped below 109.000 on the back of news that trade signing could be pushed out to December, but lifted again this morning when tariff rollbacks were announced. USDJPY sits now at 109.313.

If the anticipated phase one agreement goes as expected, the risk-on mood continues, money comes out of safe-havens (JPY, CHF, gold), and rates will be further priced out. In the case of more speed bumps, rate expectations will tick back up, and the safe-havens strengthen.

If you’re a Pepperstone client, you can reach out any time for updates on interest rates pricing. Send me a message: [email protected]