The Daily Fix: A dovish Fed promote a weaker USD

The Fed has prompted a run on the USD, with the USD index pulling further below its 200-day moving average (MA) and tracking through to the lowest levels since July.

EURUSD has attracted the bulk of the flow ahead of tonight's ECB meeting, with traders eyeing a move into 200-day MA (1.1154) and the Oct/Nov highs of 1.1175, while AUDUSD has put on a lazy 1.0% on the session, to be the best performing developed currency on the day. 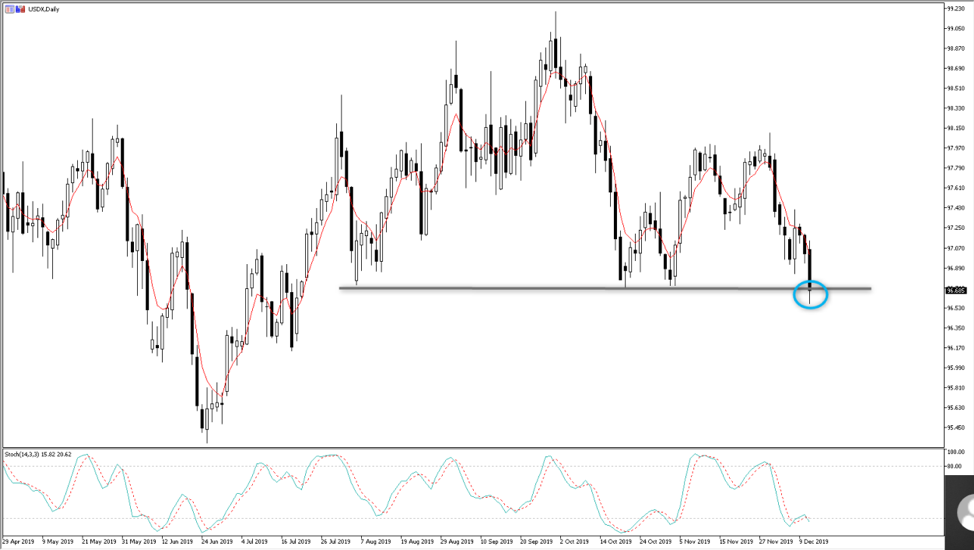 GBPUSD is back holding above the 1.32-handle, although this is purely a USD move, as EURGBP is finding buyers easy to come by. We head into the UK election through Asian trade tomorrow, where price should jump around from around 10:00am AEDT, with likely sharp reactions as each constituency release their results, with liquidity a decisive factor on the extent on the whippy price action. We are watching GBPUSD overnight implied volatility as it rolls over, and there is no doubt it will be sky-high, with traders pricing some punchy moves in the pound. One for the bravest of souls.

The Fed have struck a fine balance

The Fed has effectively struck a fine balance. Suggesting on one hand that the US economy is “in a good place”, with the statement losing a passage referencing “uncertainties”. At the same time, Powell has focused on sanguine inflationary trends, suggesting he would need to see a “significant persistent inflation rise needed to hike”. Certainly, the latter comment has resonated with investors, and whether we look at inflation expectations or even the Fed’s own projections on core PCE, “sustained” isn’t happening anytime soon, if at all.

The US 5-year Treasury has dropped 5bp on the day, as has 10s, but take the curve further out and the 3m v 10yr Treasury has flattened by 5bp. Equities have found buyers, with the S&P 500 +0.3%, although the Russell 2000 is flat on the day, which takes some of the gloss of the move. Our opening calls for Asia are mixed at this stage, and we see the ASX 200 opening 20-points lower, while Hong Kong and Japan should open modestly stronger.

Gold has gained 0.7% to $1475, helped by USD weakness (AUD-denominated gold is actually 0.3% lower) and US 5yr real rates -5bp. Platinum has gained 2% though (in USDs) and remains the high beta play on precious metals. Copper has been a play on reflation of late and we see ‘the Doc’ up 1.1% to $2.795p/lb, and I continue to like this as the long leg of a long copper/short gold pairs trade.

Trade still the elephant in the room

The fact is the big event risk remains in place, with the world watching to see if the 15% tariffs kick in on $160b of Chinese exports on Sunday. However, this is firmly outside of the Fed’s control and as much as Trump would like them to, the Fed is not in the business of setting policy on what could happen in a geopolitical joust. What the Fed has delivered is about as much as we could have hoped for in this period, where the bank is collecting new information before potentially making changes in latter 2020, if at all.

However, at this juncture, the reduction in core PCE this year to 1.6% and the shift in the dots plot for 2020, where 13 members (from eight in the September meeting) are calling for rates to be left unchanged, with just four now calling for a hike, and we can deduce that the Fed are simply looking for an extended pause and are in no rush to move.

A reduction or upgrade in the unemployment forecasts are a modest positive, but the greater focus was on Powell’s connection between the US labour market and wages. In fact, Powell couldn’t characterise the labour market as strong, because he specifically said we’re not seeing higher wage increases. One explanation for that is low productivity, which is disincentivising employers from increasing wages at a faster clip. It’s hard to even consider hiking in that environment.

There has also been some focus on the similarities seen today as we saw in 1995 and 1998 and the ‘insurance’ cut cycle. In both case studies, we saw insurance cuts with rate hikes, kick in after eight months later, and certainly in 1998, where the Fed went onto hike six times, with core inflation having moved up about 80bp. Powell is clear he sees the probability of a sharp rise in core inflation happening this time around as incredibly low. The market agrees, in fact, with one full cut priced into swaps markets over the coming 12 months the market is still of the belief that the conversation should be as to the triggers of easing rather than hiking.