Chart of the Day: Gold/silver ratio

Silver has surged in popularity of late, with huge volume traded on the silver ETF (exchange-traded fund) last week. In fact, estimated inflows into the silver ETF (SLV) last week totalled an impressive $164m - the biggest weekly inflow since January 2013. This dwarfed the inflows seen into the gold ETF (GLD). 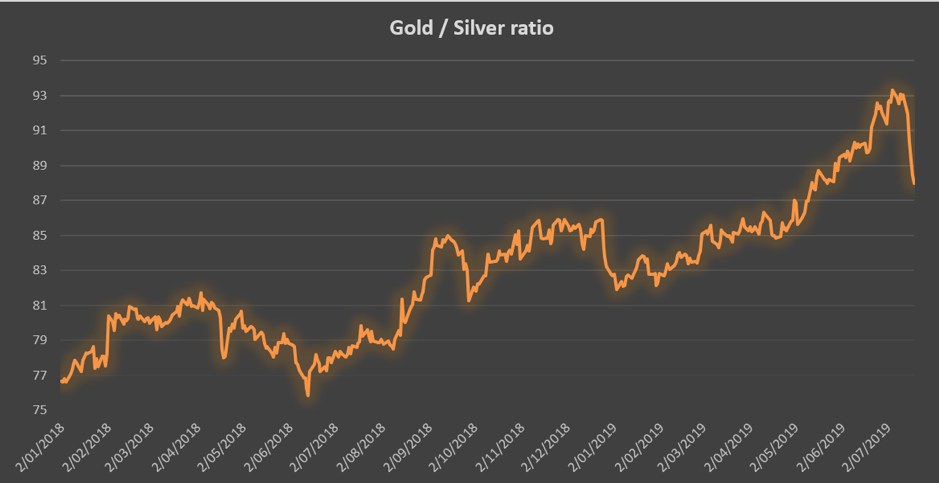 One interesting way to evaluate precious metals is through the gold/silver ratio, which collapsed 5.4% last week - the biggest weekly decline since July 2016. The trend was certainly mature, with the gold/silver ratio getting to the highest levels since 1992. So is the reversal just a blip in the radar or something with genuine legs?

There's an interesting macro thematic around this ratio too. Some believe silver is more aligned to the perception of real economic activity. So if this is an emerging trend of silver outperforming gold, it will challenge whether things are as bad as thought for the US and global economy. That said, it's easy to perceive this as the market paring back expectations of the Federal Reserve's aggression in next week’s FOMC meeting, especially after last week’s communications nightmare. The probability of a 50bp cut is now set at 18%.

Consider that if there is more downside in this ratio, meaning gold underperforms silver on a relative basis, then being short of gold and long of silver and netting off the exposures as a ‘pairs trade’ could be an interesting way to trade this theme.