Chart of the Day: EURAUD

Short EURAUD looks compelling — both from a tactical and technical perspectives here. Firstly, consider the market has now priced a 50bp cut from the Federal Reserve (at the 31 July meeting) at 65%, with New York Fed President John Williams saying swift action was required. Tactically, if the Fed is going to cut by 50bp, it’ll be the AUD, CAD and NZD that likely benefit from the reflation here, with traders flocking to emerging-market assets. 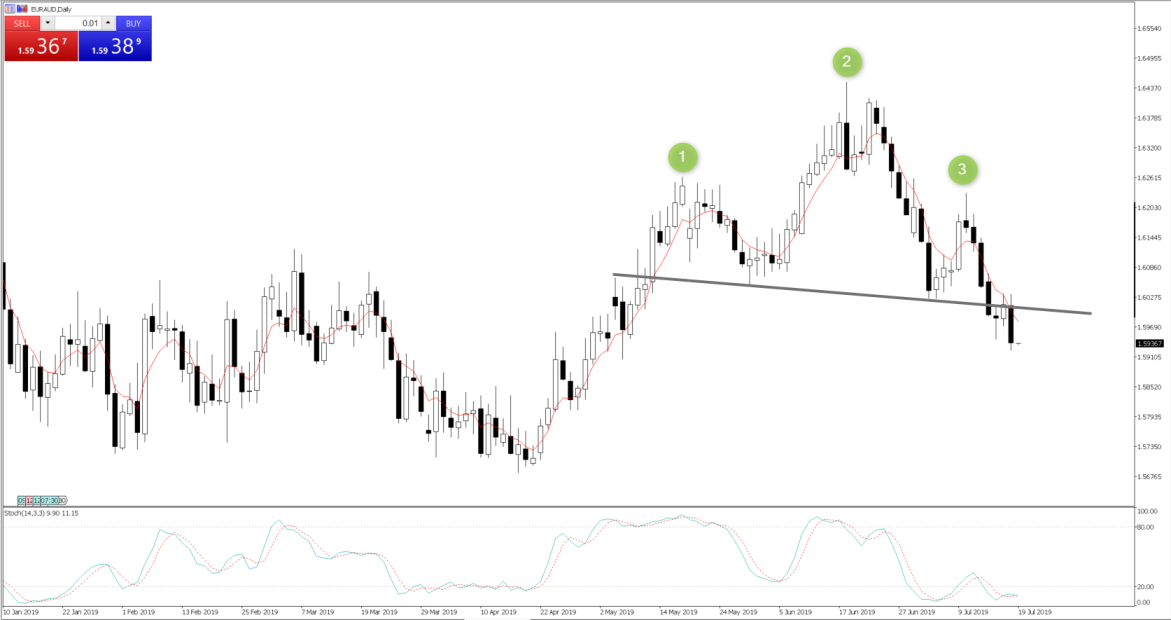 A 50bp cut from the Fed also gives the European Central Bank greater scope to be aggressive at next week’s central bank meeting, predominantly as the last thing the ECB wants to see is a higher EURUSD. There’s already speculation that the ECB is reviewing its inflation target of below but close to 2%. Interestingly, swaps markets are now pricing a 56% chance the ECB’s deposit rate goes down to -50bp. While the risk is they don’t cut next week, the market will still be expecting strong guidance that a cut is coming, as well as clarity on renewed asset purchases (QE).

The fact that we’ve seen iron ore rally 68% year to date, and the idea that Australia will be running a surplus perhaps even by September seem underappreciated to the market. The market still holds a punchy short AUD futures position seen in the weekly Commitment of Trader’s report, and yesterday’s Aussie employment data provided the Reserve Bank of Australia limited scope to cut rates anytime soon. The fact we’ve also seen stability in business confidence and various housing metrics suggests further AUD shorts could capitulate.

Technically, the “head and shoulders” pattern has received attention, and this would target the April lows. This seems punchy. But if this pair starts to trend, then I’d be looking to add to short exposures.